Episode 22: The Knights of Pen 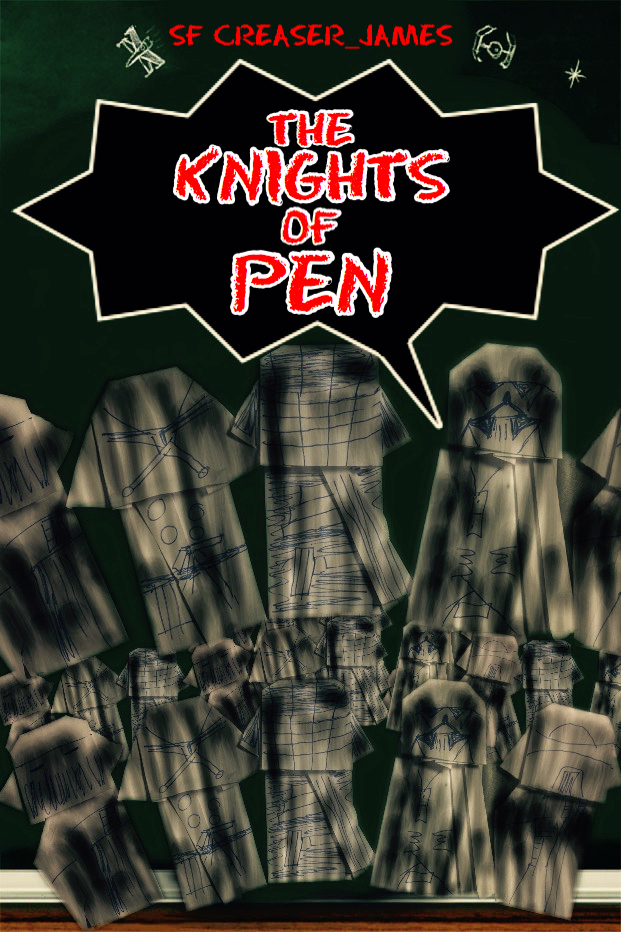 THE KNIGHTS OF PEN

It’s Not Over Yet

I was just opening the door to leave McQuarrie Middle School forever…
Origami Yoda had other plans.
That’s when I noticed it in the glass doors’ reflection: six students approaching me from behind, eyes fixated on mine and plastic lightsabers clipped to their belts. They didn’t look too happy.
I turned around. “Put your toy weapons away. I mean you no harm.”
“Oh, good,” the third student hissed, hungrily. “Easier for us.”
I recognized him as one of the Bounty Hunters, Jim. His friends, though, were all pretty intelligent and popular students in the school. Max, Helen, Carol, etc… even Ben.
“You’ll pay for all the damage you caused to the school, Tommy.” Ben pulled out a modified version of his EZ Darth Paper. The other students pulled out puppets of their own.
“The Knights of Ren.” I blurted out.
“The Knights of PEN, actually.” Jim cracked his knuckles and grinned. “And you are to report to Principal Howell’s office. Immediately.”

So, uhh… We have a big problem. I was SUPPOSED to be daydreaming about my super-fancy-pants-richy-rich Walt Disney’s School For Gifted Artists, but instead, I get approached by a fellow student in a dark hoodie wielding an origami Dark Sider. Why does this always happen? And the worst part is that my new recording thingy barely works at all and sometimes doesn’t punctuate things the way it should and it doesn’t make new paragraphs and sometimes it even puts down the wrong monkeys from what I’m trying to say! (Gah! I said WORDS!) Anyhow, the Dark Side loser (he calls himself “Supreme Liter Coke,” oh brother) puts me in a headlock and takes me over to the guys’ bathroom. He looks under the stalls to see if anybody is inside, then shoves me face-first into a stinky, smelly, soaking-wet dinosaur. (TOILET! I said, TOILET! Urgh!) I was barely phased by the swirly, as I’d had many of those over the years, but what really bugged me was the way this hoodie guy spoke to me. He acted like he had some sort of authority over me and my friends, and I detested it. He tells me he has something to discuss with me, and now I’m waiting for him to come back, since he duct-taped me to the sink. He says he has some big secret to tell me, and an offer I can’t refuse. I don’t care what this dude says, I’m not intimidated. Oh, wait, he’s back, gotta go.

I’m back. Guys, I’ve learned a terrible truth. I’ll tell you all–in person–at lunch. If Dwight and Tommy aren’t already away from the goodbye party in the cafeteria, then get them to leave. There’s a traitor in our midst…

“Tommy…” Principal Howell growled. This wasn’t his normal Howell-growl. He seemed genuinely furious. “I must say, I didn’t see it coming. You kept us in the dark for all these years.”
“Sir, with all due respect, what are you talking about?” I gulped. “I didn’t do anything!”
“Thomas, you’re not in a position to lie. A student has complained about your behavior…” Howell showed me a picture on his iPhone of a damaged wall in the hallway. “…and has given me proof of your actions.”
Above the wall, it had a message. It said a really bad word that none of us would have used. And guess what was taped next to it? Foldy-Wan Kenobi. MY Foldy-Wan Kenobi.
“May I ask who gave you this complaint?” I started reaching into my backpack for Foldy-Wan.
“That’s none of your business. This isn’t just about the wall, Tommy. This is about everything.”
“What?” My hand dug through the contents of my backpack. Foldy-Wan was nowhere to be found.
“Your friend Kellen came clean about your so-called Bounty Hunters,” Howell said with a smirk. “You formed them with the help of Lisa. You just couldn’t stand submitting to your elders and teachers, huh? The Origami Rebellion didn’t do it for you?!” Howell slammed his fists on the table. My heart jumped.
“OUT!!!”
“But, sir, I–!”
“NOW!!!!” Howell screamed, a fire in his eyes.
I walked out in confusion, my heart pounding fiercely in my chest. Was this a dream? Would I have to go somewhere like CREF? It’s hard for me to admit this, but I was terrified. I remember wondering how horrible it would be for Dwight had he gone there. In my heart of hearts, I felt like that little Youngling who bumped into Vader in Revenge of the Sith. Heartbroken. Betrayed. By Kellen.
Kellen!

“Sorry dude, you’ve been kicked off the Rebel Council.” I stared Tommy dead in the eyes.
“What!? You can’t do this!! You wouldn’t!” Tommy struggled to hold in his clearly boiling anger.
Sara put a hand on his shoulder. “No. None of us want to, but… we have no choice.”
Tommy’s glare fixed onto me. “Why did you do this, Kellen? Why frame me?”
“What are you talking about?” My mouth spoke without my heart’s consent. “YOU betrayed us. You made us think you were our friend, and you destroyed the school we love. We will NEVER forgive you!”
Silence. Only the heavy breathing of Tommy kept me from breaking out into tears. I hated every moment I continued down the dark path. If I’d ever get a chance, I would pummel the Supreme Leader into jelly for this.
“So be it.” Tommy shoved past Sara a little too harshly and trudged down the hallway. Part of me hoped I’d never have to see him, or face his righteously accusing glare, again. This was all my fault.

“We will NEVER forgive you!”
Kellen’s words echoed in my head. I’d be an outcast. Everything would be gone. Even my best friend and girlfriend, wrong as they may be, would be lost.
“So be it.” I ran off to find the one person who would never give up on me. He would know what to do.
“Dwight,” I sighed with relief after finding him locked in the gym closet and screaming about squirrels. “Everyone thinks I vandalized the school. They’ve kicked me out. I need your help.”
“What about Origami Yoda?” Dwight asked clearly.
“Yoda said we didn’t require his help anymore,” I mumbled. “He wanted to go visit Captain Micah. We were selfish and kept him way longer than we should have. I won’t make the same mistake twice. I came to talk to you because you’re my friend.”
Dwight’s eyes lit up for a moment, then died down as he looked at his feet. “My mom wants to transfer me to a different school next semester because of you.”
My world turned upside-down and I struggled for breath. “No.”
“She thought it would be best if I avoid Davison Middle. She got a call from Mr. Howell today. He sounded mad. What happened?”
I lowered my voice to a whisper. “Dwight, listen, I’ve been framed.”
Dwight blinked. “I believe you, Tommy.”
At that moment, I realized… Dwight wasn’t mumbling. A deep sadness had rested on McQuarrie Middle School. (At the very least, I was definitely sad).
It didn’t take long before my sadness gave way to anger. Today was already McQuarrie Middle School’s last day, after a series of destructive incidents ruined the school’s budget and threw people like Mr. Howell deep into debt. But now, Kellen had framed me for ALL of it. I swore that I’d clear my name and protect McQuarrie Middle School now that I was on my own. I would have revenge.

The Rise of Supreme Liter Coke

It is a dark time for the Origami Rebel Council. The Supreme Leader has risen from the ashes of Tommy’s leadership and will not rest until the Force Ghost Origami Yoda has been found. We’re not even allowed to use our puppets unless it’s to hunt Yoda down, and, of course, none of us want to do that. What we did want to do was save Dwight and Tommy, but if we do, the Knights of Pen will rip our origami puppets to pieces, and something about Kellen’s behavior is telling me we’d lose another friend if we did.
Everyone is too scared to ask why they’re doing this. In fact, I think I’m the only one brave enough to even type this email to you this Tommy. Well, besides Sara. I’m sure she’ll tell you about it. I know this is a short chapter but, oh man, save us Dwight and Tommy, you’re our only hhhhhhhhhhhhhhhhhhhhhhhhhhhhhhhhhhh

Tommy’s Comment: Poor Mike. I think Kellen got to him before he sent the email!
Dwight’s Comment: Elementary, my dear Tommy. Had Kellen been the one to find Mike, he would have deleted all mentions of himself in the email. The perpetrator must have been a Knight of Pen.
Force Ghost Origami Yoda’s Comment: The Kellen we knew, gone he is… Consumed by the Dark Side…
Sara’s Comment: Hey, guys?
Tommy’s Other Comment: SARA???
Sara’s Other Comment: Why are you guys writing down everything I’m saying? Stop it. It’s weirding me out… Tommy. TOMMY.
Tommy’s Other Other Comment: Oh. Sorry, honey.

I Left The Council (Secret Plans)

Ever since the moment I told Tommy “we had no choice,” I regretted it. Jim and his friends have re-dubbed the Council: The Knights of Pen. They have everyone’s puppets, even my Fortune Wookiee and Han Foldo. I tried to make a team of rebels to steal them back, but Mike was the only one brave enough to try. After that email he sent you two, Helen took him to Principal Howell. We haven’t seen him since. Nonetheless, we thought of a plan:
The Supreme Leader usually keeps our puppets in his bag. The thing is, he carries that bag around with him everywhere! It’s only in the library that he doesn’t have it with him. He sits down to read The Montana Chronicles every afternoon at 3:00 while his knights guard the bag. We think, if we can form a small band of rebels, we could create a diversion, distract the guards, steal the origami, and return them to their owners!
“And we want to risk getting in more trouble to steal paperwads why?”
“One, you’re starting to sound like Harvey,” Sara stuck her tongue out at me. “And two– because if we return everybody’s puppets to them, maybe they’ll be willing to trust you and Dwight again. I mean, it’s worth a shot, right?’
Me and Sara looked at each other, then Dwight, and smiled.
It was time to get to work.

THE END… FOR NOW!

The Knights of Pen cover stars courtesy of SD CJ

Enjoy the amazingly stooktastic stories on this website! Thank you! Cancel reply